It was a hype of activity for the PYMA Class of 2019 as they rushed to collect and check their Matric Results. PYMA staff and all the Board Members have congratulated all the matriculants who passed with flying colours in their 2019   NSC Matric Examinations. They also applauded the PYMA Matriculants for being committed to the PYMA programme. 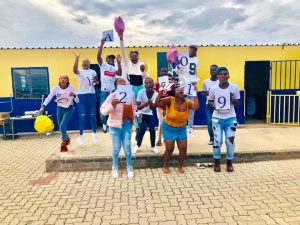 “Our matriculants used to attend our session every week and they showed lots of dedication, enthusiasm and colossal passion in their academic studies” explains the PYMA Executive Director, Mr Bokang Mokoena. “I also wish the best for the Matriculants in their future endeavours and finally their hard work has reaped positive benefits of 83,3% Pass Rate and 87% Tertiary Eligibility. “said Mr Bokang Mokoena.

PYMA is a non-profit organisation (NPO) that was established in and since its establishment, the organisation has grown to serve more than 300 children and young people in Freedom Park and Eldorado Park community through education intervention programmes.

When also being interviewed, PYMA Associate Operations Manager, Mr Mthandazo Khumalo stated that this month of January 2020, PYMA will host a Matric Day Event with the aim of celebrating their Class of 2019 that excelled well despite all odds. “As an organisation, we are very proud of these diligent, industrious and proactive young people and hence it is vital for learners to take advantage of our Afterschool Programmes interventions that are implemented in their respective communities since the latter aids a lot improving academic performance of learners” explains Mr Mthandazo Khumalo.

Kananelo Ramollo (Grade 12:2019) from Freedom Park Secondary School who passed with a Bachelor Pass and Distinction is one of the students who also used to attend the PYMA Afterschool Programme.  He stated that he is on top of cloud nine and he continues to send his warm gratitude’s to PYMA because the organisation supported him till the final day when he wrote his exams. “I wish to study Forensic Science and I have already been accepted at various institutions where PYMA helped me to apply last year” Kananelo said.

Rakgolo Phaka (Grade 12:2019) who also excelled well in Grade 12 with a Bachelor Pass mentioned that he will continue to be part of PYMA no matter what because, the organisation assisted him a lot during his education journey. Enoch Kgothatso Msoma who was also a (Grade 12) student in 2019 expressed his happiness and joy and highlighted this “Thanks to PYMA for all the support and I am very glad that the organisation helped me thus far and may the organisation continue to reach out to more learners so that they excel well.”